Negative interest rates refer to a scenario in which cash deposits incur a charge for storage at a bank, rather than receiving interest income.

Eleven countries in Europe are now paying investors a negative yield when they buy their 10-year government bonds. There is over $17 trillion dollars invested in European bonds that pay negative yields. Is the United States also headed for negative interest rates? Just this week, President Trump called on the Federal Reserve Chairman Powell, to lower interest rates to zero or lower.

On September 12th the European Central Bank (ECB), which is similar to the Federal Reserve in the United States, lowered interest rates into record negative territory to a negative -0.50bp’s (1/2 of a percent).

Why are interest rates going negative? Europe’s sagging economy is not improving, so the ECB cut interest rates again to try and stimulate the economy. They also indicated they are willing to start more stimulus (printing money) which is called quantitative easing.

In the United States Federal Reserve officials are worried about risks that could derail the record 10-year-old economic expansion, like the trade war with China and a slowdown in global growth. The goal of lower interest rates would be to spur banks to lend more, keep the economy growing and encourage businesses and consumers to spend more money.

As a result, the Fed is expecting to continue to trim interest rates to create more borrowing and economic growth. Some analysts are suggesting five more rate cuts by 2021. This would put the 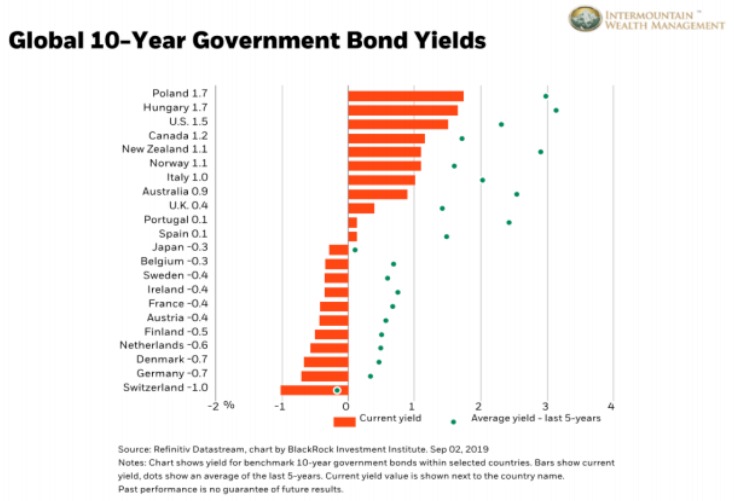